Yesterday I was in the watch department of a local store and a man and a woman were there buying a watch. They were taking a long time to buy a watch. The conversation went something like this:

Woman: Are you sure you want this?
Man: Yeah. I really do.
Woman: But all you need is a band.
Man: But for a few more dollars I can get a whole new watch. It just makes sense.
Woman: But you already have so many watches.
Man: I like them.

At first I thought they were married and then I heard this exchange:

Woman: You can borrow some of my money. Your money is in the truck.
Man: It’s my money in the truck.
Woman: I know. I left it there so I’m going to give you some of mine so you can get the watch.

I didn’t really have a choice but to watch these people because there was only one sales clerk behind the counter and she wasn’t going to take care of me until this guy made up his mind.

Man: I’ll take it! I’ll take the watch. Can I wear it?
Clerk: Of course you can wear it.
Man: Can you undo it? Can you take all that stuff off of it for me?
Clerk: Sure.

I began to notice another person on the other side of the counter watching the transaction as closely as I was. The guy watching was developmentally disabled and suddenly shouted, “YOU GONNA BUY A WATCH?!” The watch buyer confirmed that he was buying a watch and shouting man said, “BUT YOU ALREADY HAVE A BUNCH OF WATCHES!”

“I know. I like them. And it just makes sense.”

The guy spun around and smiled at me. Then he took off the watch and handed it to the clerk. She set it then placed his new nine dollar watch back on his wrist.

As I left the store the guy who liked to shout was still standing there. As I walked by him I said, “Hi.” He just stared at me blankly. I got about 20 feet away from him when I barely heard him softly say, “Hi.”
Posted by Greg at Friday, December 29, 2006 3 comments:

This Day in History 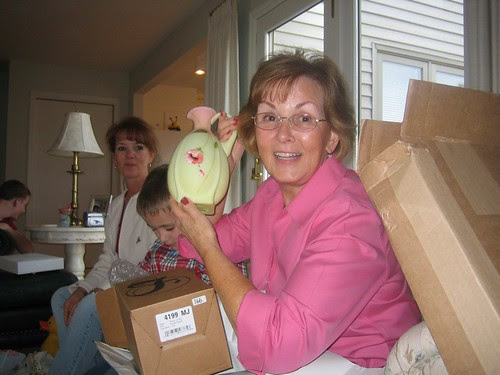 Hey mom! Did you know that on the day you were born The Helen Hayes Theater, on CBS radio, was called the first casualty of World War II? Lipton Tea dropped sponsorship of the program as it prepared for shortages in tea imports from India.

What does that have to do with you?

Grandma Gertie told me that Ms. Hayes immediately started looking for work as a nanny far away from the footlights of Broadway. She decided to start her new life in the middle of the country; Central Illinois to be exact. She called the local hospitals and discovered that you had just been born. She immediately hopped on a train and showed up on Grandma’s doorstep with her entourage in tow. Grandma had no choice but to accept her offer to help raise you for the tidy sum of 38 cents per day.

After a week Helen Hayes realized that you were an absolute monster and decided that you were a baby only a mother could love. She fled your birth home to return to New York. In her haste she abandoned her man servant, Giles. Giles did not have the means to buy a ticket back east. He was forced to work for Grandma for 40 cents a day (Grandma liked Giles more than Helen Hayes) until he earned enough for a ticket home.

It took two years for Giles to earn the money he needed. In that time, the abandoned man servant grew to love you and your family. Unfortunately Giles was very clumsy and dropped you several times while attempting to care for you. Grandma Gertie didn’t have the heart to fire him so she continued to let him handle you. In that time, Giles dropped you 37 times.

Mainly you fell on your head.

And now we all know what the cancellation of The Helen Hayes Theater has to do with you!

Note to the person helping Marcia with the big words in this post:
Please give Marcia a huge hug and wish her happy birthday from us. Then speak very slowly and let her know how much her family loves her. Thanks. . .
Posted by Greg at Thursday, December 28, 2006 No comments:

Everything Old is New Again 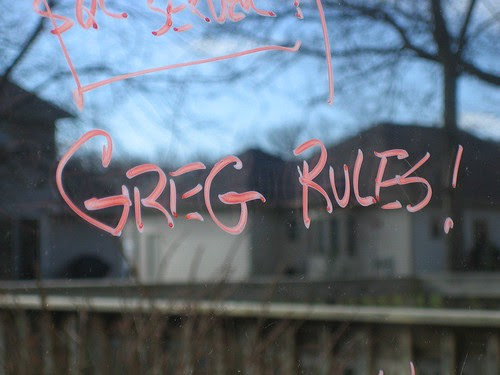 Our long national nightmare has come to an end.

It's a fresh start for Greg and Deb on the Web. In the past you could always get here via www.gregorylee.com. These days that URL is the only way to get here. That's good and bad. By making the change I'm going to lose my Google rank, it'll take months for the crawlers to find me and my hits will dwindle to around three each day (two of them will be me to see if you've left any comments).

The good news is the new site directory looks squeaky clean. The old server was a leftover from the days before you could publish photos, sound files or movies on Blogger. It was clunky and cluttered and ready for retirement.

We're still using Blogger. I got a free copy of Movable Type and read a little about using it. The more I read, the more visions I had of me sitting in the basement until 3:00 a.m. trying to get everything to work. As much as I hated to return to Blogger I knew it was the easiest way to get back online.

So here I sit, blogging on the couch while I listen to Allie read aloud and Julia mutter what sounds a little like obscenities as she plays with some of her new Christmas toys.

Speaking of Deb, if you read her blog you'll find out if Allie is going to live.

She's going to be fine. She had kind of a crappy Christmas, but hopefully the sea of toys I'm looking at right now beneath the tree will be some compensation for the massive amount of puke she's had to deal with over the last few days.

Guess I won't be sending any letters out anytime soon. That's okay. You wouldn't have been able to read my writing anyway.
Posted by Greg at Tuesday, December 26, 2006 6 comments:

Last night we watched Mr. Magoo’s version of A Christmas Carol. I kept nodding off while I watched the 1962 cartoon (Deb and the girls disappeared upstairs for bath time). Each time I fell asleep I had these weird visions of what my subconscious thinks a late 60’s early 70’s Christmas was all about (men dressed in sharkskin suits attached to women with bouffant hairdos all prancing around aluminum trees and fake snow).

While Mr. Magoo was a decent catalyst for holiday nostalgia, I find that smells are what really start Christmas memories churning in my brain. It’s not the scent of gingerbread or a roast turkey that starts the flood. Pine needles have some effect but we usually had a fake tree when I was little so that’s a more of a recent addition to the vault. I’m thinking more along the lines of Scotch Tape.

I’m not saying I’m writing 3M with recommendations for Scotch Tape scented potpourri. But their tape does have an unmistakable aroma. And the smell of that tape makes me think of wrapping presents. And Christmas is, if we are able to move beyond the well intentioned propaganda, all about the presents.

Sure I have a warm feeling toward my fellow man this time of year. But that’s mainly due to the fact that I’m happy because I know I’m going to get presents. Yes, the joy of giving is wonderful but we’ve spent far too long pretending that the thrill of getting pales all that much in comparison.

My gift to you this holiday season is to let you know that you no longer have to feel guilty about visions of plasma screens and ant farms (or whatever you’re into) dancing in your head. It’s okay. You’re not greedy. You’re simply coming to terms with the fact that the anticipation of benefiting from the fruits of someone’s thoughtfulness and generosity is FUN. After all, one can’t really exist without the other. The giving yin would wither without someone else’s getting yang.

All I’m saying is that I have a fairly large yang and that you should never be timid about telling everyone about the size of your yang.
Posted by Greg at Wednesday, December 20, 2006 No comments:

Allie: Sometimes I hear a voice.

Greg: What does it say?

Allie: It whispers my name. It says, "Allie!"

Greg (Pause): Does the voice say anything else?

Greg: Well, if the voice says anything else, I want you to tell me immediately.

So ends another episode of How I Screwed Up My Kids Theater. Tune in next time when you’ll hear Julia say, “I GOT BUGS IN MY EYES!”

Goodnight.
Posted by Greg at Monday, December 18, 2006 No comments:

How I Screwed Up My Kids Theater

Greg: Then what is she looking for?

So ends this episode of How I Screwed Up My Kids Theater. Tune in next time when you’ll hear Allie say, “I like the way they squirm when I pull off their wings.”

Goodnight.
Posted by Greg at Wednesday, December 13, 2006 No comments:

Blog titles from the past few days that were never followed up by an actual blog post:

Metroid Causes Hemorrhoids
Is it Gout?
Starving the Cat
When Lazy Becomes a Felony
If Loving Butter is Wrong; I Don't Want to be Right
The Devil on Santa's Shoulder
When a Sock Becomes Toilet Paper
Things I've Found in my Navel
My Hair Loss as Metaphor
Watching Jacques Cut Up a Chicken
Why Allie's Snow Pants Almost Caused a Riot

I'm sure I'll actually get around to posting something soon. You should check it out. Whatever it is - it's going to be great. But first I need to caulk around the bathtub.

I won't be posting until I'm done caulking.

If you see a post after this then you'll know that there's fresh caulk around the tub.
Posted by Greg at Friday, December 08, 2006 No comments: