Tonight I went to Allie's orchestra concert and I expected that to compound my bad attitude.

I'm happy when I get to see her perform. And when she's not onstage, I get to make up stories about all the other kids I watch play. Depending on the length of the song, some of them get pretty elaborate. This evening I had one of the cellist overcoming drug addiction after he invents an ergonomic cello bow and pitches his idea on "Shark Tank". He winds up rich and alone. I see him as he plays his cello in his big, empty house trying to recapture the joy he experienced performing with his high school orchestra.

I watch her after a show and her face is always beaming. Then she gets home and we pester her to do her homework. The excitement and the adrenaline of being onstage wanes and the beaming becomes a murder face. I know she's thinking, "Would anyone demand that Heifetz take out the trash following a performance? I will make them pay for this."

One of my favorite parts is listening to Julia after Allie has a concert. She's always there for her sister. It's not like she has a choice, but that aside, I think she genuinely wants to  see her sister play. After the show Julia always compliments her sister and lets Allie know how much she rocked it.

It's toward the end of the school year so they're packing in a lot of performances. Last week we watched Julia's orchestra play and later this week we'll see her in choir. I'll be there trying very hard to make eye contact with my kid while she's onstage. I used to do it because I thought she might be nervous and I wanted to reassure her that she was going to be great. Now I just want her to know I'm happy to be there.

Happy to be there taking the crappiest pictures ever. They all look like bigfoot sightings. They're frustrating for everyone.
Posted by Greg at Monday, May 18, 2015 1 comment:

I've set the clock for five minutes and I'm going to write a blog in that amount of time.

I'm looking at the clock and it says 10:27 but I'm having a little trouble with the math. Ah, I have until 10:32 to come up with something delightful.

I was thinking I was going to write about something that we all have in common. You know, like an airline food joke or maybe how Mondays suck. I can't do that to you. I have too much respect for you.

Holy cow, there's really not a lot you can get done in five minutes. Julia didn't go on her parade today because we all thought it was going to rain. Then it didn't rain and it was sunny. Windy, but sunny.

Deb was traumatized by a Syttende Mai parade in the past when there was a cloudburst and she and Julia got soaked and blown around and had to take refuge in a cafe. She said she wasn't going to let that happen again this year. Plus, Julia didn't want to go. She never really wants to do much of anything. I'm pretty sure if we didn't constantly prod her she'd behave like Lenin lying in state in the Kremlin.

I wear the dad uniform a lot these days. A polo shirt with cargo shorts and running shoes. I go to school events and I look at the other dads and it's clear there was some kind of subliminal pulse on Mad Men or House of Cards that caused us all to dress alike.

Do you remember the times when you sat up with me while I was coughing all night or had that really high fever and puked a lot? Yeah, those were long nights, huh? Do you recall all those times when we’d go shopping and you’d pick up a stuffed animal and you’d make it tell me that it wanted to be my best friend? My face would get really red. Was it you who always made sure I had good meals and nice clothes? I’m pretty sure that was you. Remember when you gave me all your money so I could do crazy stuff like take off to the east coast for no reason or get an education? That cost a lot of hard-earned cash. Do you remember offering my kids the same kind advice as you gave me when I didn't know what to do? Those words are always so helpful. 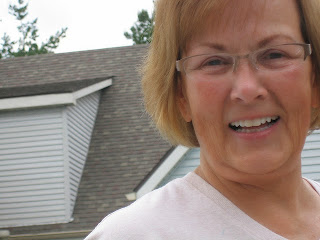 Every six months Allie and Julia show up at their dentist. The role of their dentist has been played by three people (that I’m aware of) – the handsome, young newbie, the beautiful, all-business partner and the patriarch of the entire operation. Most of the time, the old guy is the one who flies in at the end of a cleaning to take a quick glance into my kids’ mouths and then provide Deb or me with a lightning-round consult.

He’s kind of creepy. But we’ll get to that.

His office has a movie theme. At the entrance there’s a ticket booth. It's occupied by what looks like one of those puppets law enforcement uses to convince second graders to stay off meth and avoid men in vans who ask for help looking for lost puppies. There are movie theater seats and a large-screen TV playing the latest Pixar release. Off to the side, there’s a PG-13 waiting area that screens more intense films like “Batman Begins” or “Marathon Man”. . .  Okay, maybe not “Marathon Man”. But I’d love to see a kid walk to his/her exam chair after seeing Laurence Olivier repeatedly ask Dustin Hoffman, “Is it safe?”

The top dentist has a staff of at least five people working in reception and four hygienists and three other people who seem to help out the hygienists. They all wear matching scrubs. I asked someone behind the reception counter what the color rotation was. He told me, “Tuesday is red, Wednesday is blue, kind of like this pen cap.” He turned to the woman sitting next to him to get confirmation that he properly characterized the color. She gave him an approving nod. “Thursday is black and Friday is true blue which is kind of like the end of this pen.” The woman next to him repeated the nod. 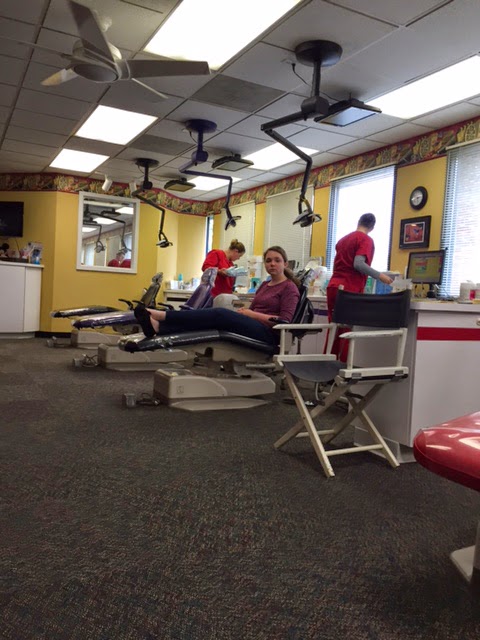 When they’re ready, they lead you back to a row of six exam chairs. Each has its own monitor on the ceiling so patients can watch the same Pixar movie that was playing in the reception area. That’s the part that really makes me jealous when I compare my experience at the dentist. I want to watch “Big Hero 6” while my gums are poked, prodded and scraped.

You hear the hygienists ask the parents the same questions. “Have there been any health changes? Is she on any medications? Has she committed any felonies since her last visit?” When you give them the answers they want to hear they go to work on your kid. This last visit I watched Julia’s feet. She was slowly waving them back and forth while she waited for the first dental tool to make contact. It was clear when things got uncomfortable because the waving would get faster and faster until the hygienist would notice and ask if Julia was okay.

Allie has three years of dental experience on Julia. I listen to her ask the hygienist questions that wouldn't occur to me to ask about her dental health. I’m sure soon I hear Allie ask, “Are you sure you want to use a C-1 scalar for this? I’d go with a G-11.”

Next, from out of nowhere, comes the dentist. He spends around five minutes stirring a mirror and dental probe inside my kids’ mouths while speaking code to the hygienist. The hygienists strike a balance between chit chat and complete reverence during these five minutes. I’m almost surprised when the dentist doesn't pat them on the head when he’s finished.

It’s never as if I believe he doesn't care about my kids’ teeth, but I can’t help but sense the vibrations of commerce when I’m around him. It’s clear I’m getting a carefully timed two minute follow-up after the exam that maximizes his turn over. I can’t help but see him in a captain’s hat, laughing hysterically behind the wheel of his yacht as he steers it around some crystal-clear Caribbean bay. It’s all just kind of creepy. It’s as if he sticks a straw in my neck and sucks out a little bit of my soul - like I’m a juice box with a dental plan.

I’m not complaining too much. The girls like going to the dentist, or at least they don’t seem to mind it. The free dental gear and a prize at the end of their visit helps. I noticed this time Allie skipped the prize. She used to always get a huge ring or a fake bug.

Julia picked out a parachuting alien.
Posted by Greg at Wednesday, May 06, 2015 2 comments: