Thanks for the Reminder, Richard

I got an email letting me know that I've been signed up for another year of Wired. The email told me the subscription was from Richard Springman.

Richard Springman. That name makes me think of a lot of things like:

I wanted to complete my State Fair experience today by having a corn dog. We skipped the $6 version on the midway and settled on a stand in the carnival area that was selling them for $4.

I walked up to the window and told the guy I wanted a corn dog. As he wrapped it up for me he smiled, "Everybody loves these. Everybody wants these. I know why."

I smiled at him mainly because he didn't have any teeth and I was having a hard time understanding him so I leaned in.

I told him I wanted to know and he said, "Because I know what's in 'em!"

He had already handed my corn dog to me and I know that despite my grinning I had a look in my eyes that said, "You're going to tell me your seminal fluid is in the batter, aren't you. . ."

"I know what's in 'em because I make 'em. Do you want to know what the secret is?"

I hadn't eaten the thing yet so I was confident he wasn't going to spring anything too horrible on me so I asked, "What's in them?"

"Sprite. Half a cup of sprite. It gives the corn bread a sweeter taste."

Half prepared to hear that rat's milk or strained hydraulic fluid from the Tilt-a-Whirl was his secret the only comment I could manage was, "Awesome!"

The corn dog with Sprite in the batter was good. The chocolate covered bacon was not. It made me nauseous. I'm a huge bacon fan but I couldn't manage the chilled melange of greasy, salty, porky sweetness. It wasn't a nightmare. I can actually understand why someone in a very self-destructive mood might even enjoy this treat. But for me, on this day, it was just icky.

There are much better things out there to eat on a stick.
Posted by Greg at Monday, August 10, 2009 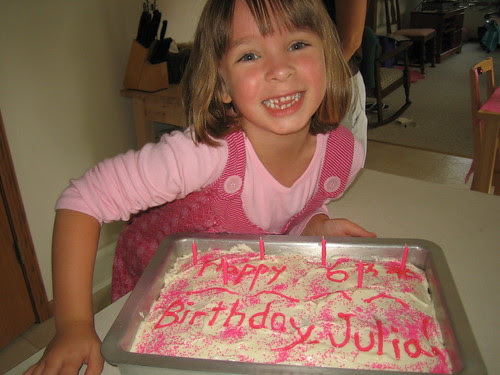 On Thursday I picked her up and shook her and demanded to know what she did with five year-old Julia. She didn't really have a good answer for me but it's clear six year-old Julia is going to hang out with us for a bit.

I'd better spend as much time with her as I can. It seems like these Julias are switching themselves out on a fairly regular basis.
Posted by Greg at Sunday, August 02, 2009