This morning, when I asked Allie the requisite, “How does it feel to be seven?” she told me things weren’t a lot different. From the looks of things, I couldn’t argue with her.

But I knew better.

Every day this kid grows and adds a new trick, another turn of phrase, a new perspective with more depth and ever increasing sophistication and complication. I watch her grow and wonder which new facet she’ll keep and which one will be cast aside to make room for another and another and another after that.

She’s a lot better than sea monkeys and a lot more interesting than an ant farm.

I’m glad Deb and I set her in motion seven plus years ago.

Despite what I’ve written, I’m not one of those dads who believe that the sun rises out of my child’s rear end. I see her pick her nose, I watch her when she’s deliberately cruel to her sister and if she doesn’t stop eating with her mouth open I’m going to put a Jacuzzi in her bedroom and force her sleep in the garage. That said, as clearly as I see my daughter for who she is it’s just as obvious that she (along with her sister and mother) is the best part of who I am.

So the next time you hear me bitching and I whine to you that I’m unhappy; I’m not being entirely honest. At some point, I’ve got a hug from seven year-old Allie coming my way.

How could anything be that bad?
Posted by Greg at Tuesday, January 30, 2007 6 comments:

This is our new cat, Rabies: 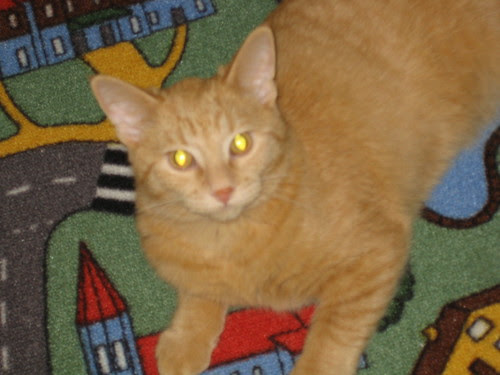 I thought that I was going to wait a very, very long time before we got another cat.

Rabies is a sweet kitty but right now he's a little shy. I've spent the evening with him in the basement. We're hoping that by tomorrow he'll be ready to explore upstairs but for now we'll let him get used to the idea of becoming a part of the family. A concept that would terrify most.

Allie had her appliance installed today. This is what it looks like:

Getting the thing put in her mouth was no problem. She sat down, they slapped some glue on the thing and then crammed it into her pie hole.

The crying didn't start until dinner time. Later I asked her why she cried she told me, "Because I didn't know how to get the food down." She says it hurts her tongue because she has a sore and when she brushes it against her "spacer" it starts to hurt.

Tonight we watched the 1966 film, Queen of Blood. I asked the girls what they thought. Allie says, "It was kinda good." Julia says, "Not Good. I don't like the alien bite lady."

Allie is not happy that I'm typing as she speaks. Stop blogging, daddy! You're not sending this to Dan are you?

I have been alone in my bedroom with fruit.

All sorts of fruit: bananas, oranges, grapes - the occasional pluot.

I usually find the time spent with fruit in my room enjoyable but I wouldn’t go as far as to say that I’ve been inspired.

In contrast, Bon Bon finds inspiration everywhere. And even when the muse refuses to kiss her, she’ll make her own magic . . . dammit.

This morning she told me about her attempts to photograph herself while balancing an apple on her foot. She made movements that demonstrated the intricacies of bending herself, unnaturally, to get the shot. Her re-creation helped me appreciate the amount of effort that went into the project. Unfortunately, she wasn’t able to get a satisfactory image of the apple on her foot. Ultimately, Bon Bon’s husband had to take the photo.

Bon Bon’s fruited foot was no failure. It was a triumph of grand proportions! Bon Bon has blazed a path for all of us (and our fruit). We even came up with a name for this exciting new genre: Fruit Contortionist.

I haven’t seen the actual images yet, but I did get to see the actual apple: 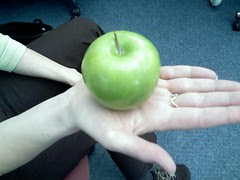 She’s probably eaten it by now.

As much as I love her work, I’m hoping she has no further plans for this particular objet d’art.
Posted by Greg at Monday, January 22, 2007 3 comments: