Girl on the Run

Allie's first 5K was a success. It was raining this morning and a little cold, but that made for perfect running weather.

We arrived early and walked the grounds while we waited for Girls on the Run group photos and the start of the race. Allie's coach found a break in the fence and we snuck in line to reach the start which meant we wound up toward the front of the 11,000+ racers/walkers there with us. As we jogged to the starting line Allie asked me when we were going to start. I looked at her and I noticed the start banner was well behind us and said, "We're racing, Allie!"

She did great. The majority of the race consisted of speed play where we'd pick a sign or a person and run to that point and then slow down for little up-tempo walking. I pushed her a little harder than she might have liked a couple of times, but for the most part Allie maintained our 80% running, 20% walking mix on her own.

Slapping her hand against the big mile marker signs as she ran by became small goals for her to accomplish along the course. Her biggest obstacle was a hill that everyone seemed to be walking up that Allie pushed herself on. She made it to the top running all the way as people out on their lawns, drinking their morning coffee, cheered her on.

The best part of the race? Allie says it was getting a drink of water and then being able to just drop the cup on the ground without getting into trouble.

For me it was looking to my right and seeing her grin, all rosy cheeked and panting, as she gave high fives to people along the course.

The only part that we had trouble with was finding Deb and Julia after the race. They waited for us at the finish line but didn't see us cross. We walked up and down the line and then waited for them at the Girls on the Run tent but didn't see them. No cell phones, no contact. Allie was a little disappointed and while they didn't actually see us I know Allie felt great knowing they were there.

We were very fortunate to be a part of an event that holds a great deal of significance for many people that goes far beyond a first-time fun run. I found a clip from today's race that does a far better job of illustrating this point than I could:

We met Evelyn at the book store. She was in a wheelchair accompanied by a man with a big growth on his neck.

Here's what Allie, Julia and I learned about Evelyn in approximately three minutes:

This year you asked me to get you a Mother's Day card. 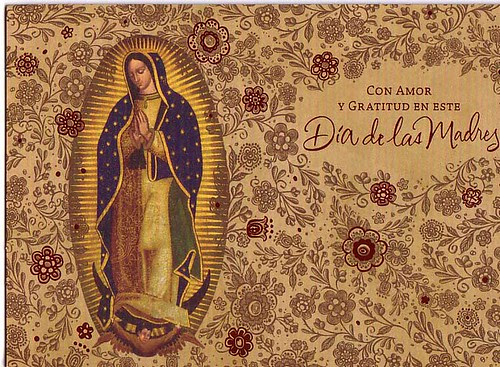 This is what it will look like when you open it up in a few days or so: 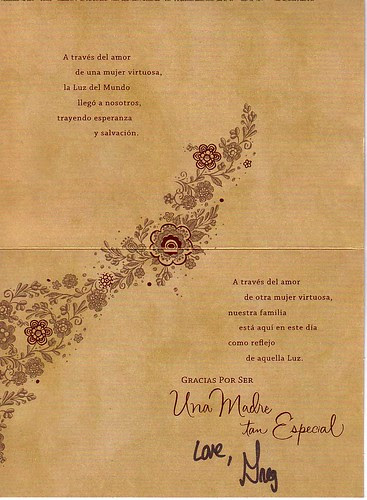 I know you don't speak Spanish, and neither do I, but this card seemed to capture the nuance of what I wanted to express this Mother's Day.

These days a tour of the Whitehouse requires congressional clearance. According to the Web site: Requests must be submitted through one's Member of Congress and are accepted up to six months in advance.

I've walked around the Whitehouse. I've been waved at by, then, President Clinton as his motorcade pulled away from the rear gate (you could barely see the guy through the bullet-proof glass). I've chit-chatted with a uniformed Secret Service agent at a side entrance (those aren't hand warmers beneath those leather flaps). I've even stolen a few leaves off the lawn for Allie.

I still want to get inside someday.

This will have to do for now:

http://www.flickr.com/photos/whitehouse/
Posted by Greg at Saturday, May 02, 2009