A Story for Allie and Julia at Christmas

When I was a little boy, growing up during the depression, Christmas wasn't about presents or luxuries like food. Christmas was about stealing a little extra coal from the railroad yard so we wouldn't stick to the freezing floor we slept on each night.

Christmas meant we could wear our dress up sock (we were only given one) when we were out on the streets begging. Of course a nice sock on the foot meant a little less money in our hands. People would scream at us, "Why should I give you this penny when you have such a nice sock?" We didn't really know what to say as we stood there shivering in our burlap sacks and one good sock. A penny or two less was worth the pride we felt as we limped through the ice in our treasured footwear. It was even worth the beatings we received from Nan and Papa for being a single cent below our quota.

Those Christmas beatings were the only gift Nan and Papa were able to give us and we were grateful. They were so much more special and creative than our usual, day-to-day beatings. Nan would gather some of the prettiest rocks you've ever seen to throw at us. Papa always found the time to make up new swear words just for the holiday as he helped Nan toss rocks at our heads.

Christmas was such a magical time when we were your age. We knew that giving was better than getting. There was so much joy to be found in the faces of our loved ones as they received whatever we were able to provide. Like the time we held Uncle Shannon down and he was able to give us one of his kidneys. He screamed a lot, but we could tell they were screams of joy because he knew what that kidney would mean to us at Christmas. It was the same thing for Aunt Kim when we harvested a lung, or when we took Aunt Pam's left shin bone (there's an old table leg in there now) and Aunt Shell's right cornea.

I hope letting you know a little about Christmas past helps you understand why our Christmas present is such a special time for our family. And what's more, I hope you both enjoy your wonderful, new Christmas dress up sock.
Posted by Greg at Wednesday, December 24, 2008

Building You a Spice Rack

There was a time when this blog was all about the words. I have proof of a time when I couldn't wait to tell you about something or just remind you, in a long-winded way, that I was still around.

Lately it's all about the AV. That's not a bad thing. Pictures and videos aren't bad; but they do seem a little lazy to me. There's no need for me to attempt to provide you with the flavors of a moment. Now there's no heavy lifting involved at all. I just press a button at the right time and suddenly I have something to show you.

I don't need to write to you here anymore.

When did that happen?

I suppose I wouldn't have a problem with losing the urge if your mailbox was visited by a letter or two from me or if the journals I once kept for Deb and the kids were running out of space. But this is not the case. It's like I've sobered up and the voice in my head doesn't sound so good. It's the same melody only I realize I'm a little flat and the lyrics aren't quite as meaning charged as I once believed.

I'm not pouting. I just want to feel like getting back in the workshop and make a nice table or maybe a spice rack for you. I've got some tools and whether you think I use them to make a mean bird house or not it's a shame to let them just gather dust.
Posted by Greg at Saturday, December 13, 2008 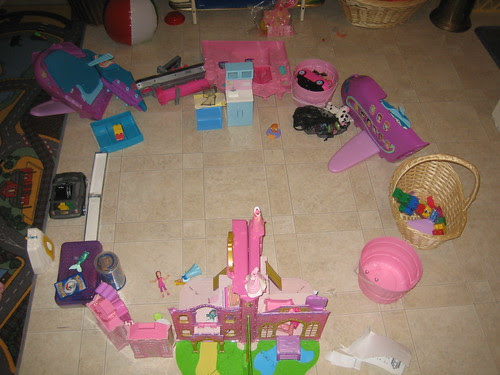 I run into these elaborate arrangements of toys all the time. I don't think it has anything to do with play. It's some kind of symbol or glyph that only the mother ship can interpret. When I get sucked up by the tractor beam I'll finally know what it means. 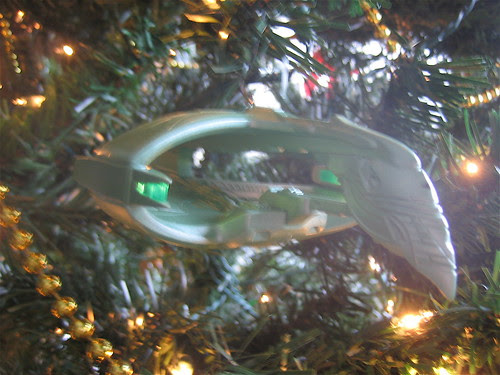 Every year Debbie makes a minor fuss about putting this on the Christmas tree. She knows that it's going on no matter what. I'm pretty sure the protest is now simply something we're supposed to do. It's a part of our holiday tradition.
Posted by Greg at Tuesday, December 09, 2008