Honey, Where is That Really Strong Magnet?

I had to say something after I heard Debbie end a sentence with, "...then you can go play in the bathroom."

Tonight will be the third night in a row that Allie and Julia have spent large portions of the evening in the downstairs bathroom.

I told Debbie that there is something wrong with the fact that our daughters want to (and that we allow them to) convert our toilet into Fort Fun.

I can hear noises and the gap at the bottom of the bathroom door allows a few shadows to dance around on the floor. Those two things aren't enough clues to piece together what's happening in there. That's led to visions of Allie offering Julia a bite of the giant blue SweeTart she found in the toilet tank or games of How Long Can You Hold Your Breath While I Lower the Toilet Seat on to Your Neck? being played in that tiny little room.

No - I don't know what happens in there. I only see the aftermath. Like tonight when I had to remove all of the couch pillows from around the toilet before I could pee. And then when I went to flush the toilet it was partially clogged. I shouted upstairs, "Did either of you stick something in the toilet?" Allie shouted back, "I had a big poop."

Most of you already know that my oldest daughter shits baseballs. This is no exaggeration. She is constantly clogging our toilets with these perfectly round bocce balls of excrement. That's the only reason I took her word for it that one of her massive sphincter bombs was the obstruction. This was good. It meant the clog wasn't something for which I was going to have to create some kind of retrieval device. Happily a plunger should be enough, but I haven't tried it yet so I may be unwinding hangers and taping powerful magnets to the end of fishing rods before I go to bed tonight.

Tomorrow night I might go into the bathroom with them and see what the fuss is about. Although that might be a problem. For a normal range of motion, there's really only room for one adult; or just two small little girls.

On second thought, I'll just let them have the bathroom to themselves.
Posted by Greg at Monday, February 26, 2007 2 comments: 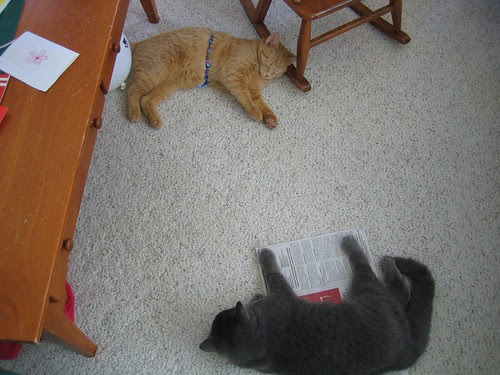 0.20mL Buprenex with a side of catnip.

We tried the same recipe on the girls hoping for similar results.

Most mornings, part of my routine involves rolling on to my stomach and tucking my knees into my chest. I stay in this position for a good 10 to 15 minutes as I listen to the hiss of water from Deb’s shower.

During this time I fart.

I usually experience two expulsions; one reasonable fart that I like to think of as a cleansing bubble and then one I’ll refer to as Gabriel’s horn. Deb is almost always in the shower during the concert, but when she is in the room I sometimes explain what I’m doing by declaring, “I TRUMPET THE MORN!”

I’m telling you this because it’s Valentine’s Day. I thought this example would help you understand just a portion of what my wife endures each day. And despite this - each day she tells me she loves me.

Allie and Julia are in the tub. Greg is scrubbing the usual amount of dirt off both.

Greg: You have crust. Do you need to blow your nose?
Julia: No.
Greg: You need to blow your nose. [Grabs a tissue]
Greg: Blow.
Greg: Harder.
Greg: Harder!
Greg: What the hell is that!?
Allie: Lemme see!
Julia: Lemme see!
Greg: What is that? [Shows Julia the tissue]
Julia: It's chicken.
Greg: Chicken from where?
Julia: From when Auntie Cat was here.

Auntie Cat was here five days ago. And we had turkey. 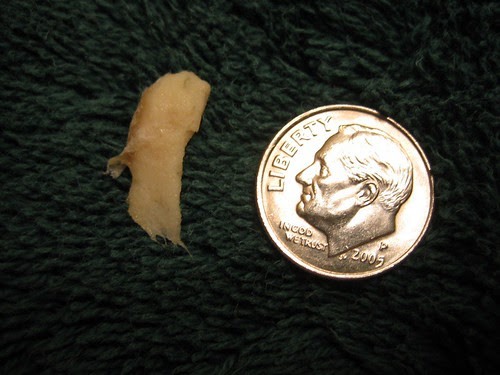 The Chill in Our House

My copy of “An Inconvenient Truth” arrived a few days ago. It’s been sitting on the coffee table, unread. Somehow I can’t bring myself to learn about the science of global warming when it’s 15 freakin’ degrees below zero outside.

That’s no exaggeration. It’s -15 (-26 Celsius) with a wind chill of -30 and all the schools were closed today. Allie was happy that she was going to have a day without math. Her mom asked her what Sunday was and Allie said, “I want a weekday without math.” I get the distinction. I really do. It’s just that I’d really like it if she fell in love with numbers. I’m not going to hold my breath.

She had a good birthday. It was very kind of her grandma, grandpa and auntie to brave the frigid temperatures to come to the party. They were in a big hurry to leave. I’d like to think it was a mix of wanting to get home in plenty of time to prepare for the following day’s Super Bowl festivities plus a need to get home during daylight hours in the intense freeze. I suspect it was more a matter of my in-laws wanting to escape prolonged exposure to me. I get the impression they believe I will physically harm them. And while I am, at times, intensely snippy (particularly when it comes to preparing food) and I do raise my voice quite a bit; I would never kill any of them in their sleep. Admittedly I work hard to frighten my family and put them on edge but I’m equally attentive about putting some effort toward the comfort thing as well.

Did I mention how I am while cooking? I am a beast when I’m cooking. It’s true. I’m sure it stems for watching too many episodes of “Chef”. But I don’t like people in the kitchen when I’m at work. If I had to provide an explanation I might tell you that:

1) I’m an insecure cook. The most that can be said of my cooking is that I’m willing to experiment and occasionally I get lucky. The truth is everything I make just seems to come out a little off. Honestly, even when I stick to the recipes something seems to go awry. My aim is for that first fork full of whatever to be so good that you will lose consciousness. If you eat food at my house and you don’t fall out of your chair, slam your head into the table and then slam it again as you slide to the floor then it has been an unsuccessful meal. So far I’ve never produced a successful meal. You might pass out on the toilet afterwards, but you’ll probably have a firm grasp on your faculties while you’re eating.

2) I have an intense fear of burning or cutting people in the kitchen. I don’t know why but I’m convinced that if you are within ten feet of me when I’m in the kitchen I will accidentally throw hot grease into your eyes while causing all unsecured cutlery to fly directly into your vital organs.

From the sound of it, you’d think that I hated cooking but I do really like to cook. I’m just a prick when I’m doing it for more than three people.

All that aside, I really do enjoy it when our family comes to stay with us. Sometimes these visits just seem to gel and we wind up making some really wonderful memories. Like the time I launched a water balloon with a giant slingshot directly into Deb’s neck at approximately 50 MPH and then got mad at her for not being able to shake off the pain in a reasonable amount of time.

Okay. That’s not a good example. But I do have anecdotes about people who have had a good time while staying at our home.