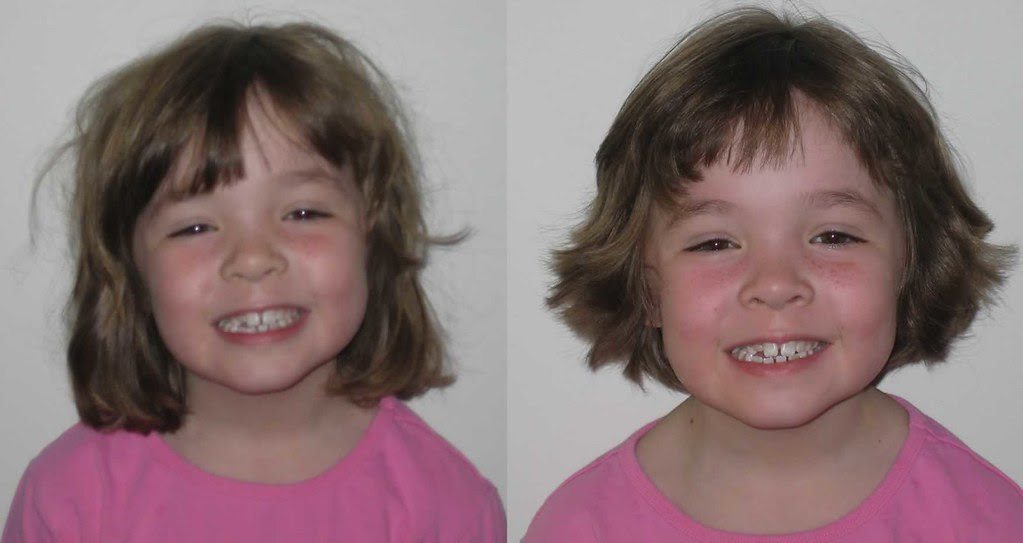 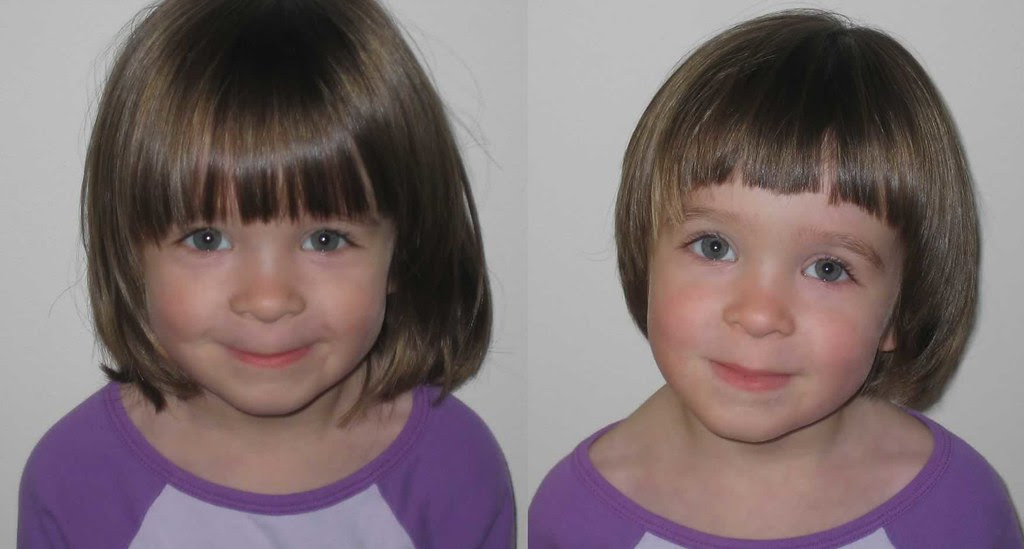 Pittsburgh is Not a Shithole

A question I get asked at work a lot is, "Where you going next?" When I tell people where I'm headed they usually respond by mentioning their favorite place to go or an amusing anecdote about something that happened to them in a particular city.

This time, whenever I told people I was headed to Pittsburgh everyone who asked immediately spat out something negative about the place. Rough town. What a shithole. Watch yourself. Needless to say, I wasn't too keen about coming here.

Turns out Pittsburgh (or at least the part of it where I'm spending most of my time) seems like a very nice city. I can't really tell you why I think it's a very nice city. It bustles and has tall buildings and all the other earmarks of a major U.S. metropolitan area. I think I'm telling you Pittsburgh is nice mainly because I haven't been ass raped like I anticipated after talking with other people about coming here.

That said, I'm not home yet so my opinion of this town could change drastically.

Truth is I've been busy so I haven't had a lot of time to explore Pittsburgh. In fact, I'm a little worn out. I tried to post last night. Here's as far as I got:

When I travel, I usually write in a journal for Debbie. It's primarily an excuse to bitch about the guy sitting next to me on the plane farting or how much I'd rather be home.

This trip I didn't write anything.

I'm not sure where I was going with this post because I fell asleep while I was writing it. I woke up lying in the bed with my laptop's battery burning a hole in my thigh.

That's never happened before. Usually I fall asleep when I read them after writing them.
Posted by Greg at Thursday, October 26, 2006 No comments:

Amy Gets a Brother

You can tell a few things from the photos:

We're extremely happy for Dan and Kerry. We could stay up for a long time celebrating the news, but we're off to bed for a full night's sleep.

G: Julia, what does red mean?

G: You're so smart! Remember what green means?

Deb and I went away for the weekend.

There are some pictures in the photostream if you're curious.

Deb found the perfect little cottage up north. We didn't know it was perfect until we got there. But there it was, all perfect and everything. . .

Do this for me - just for a second:

Take your hands and clench them into fists as hard as you can and then count to ten.

When you got to ten and you let go that's how I felt after our first ten minutes in the cottage. I felt unclenched for the first time in a long time.

I have Deb to thank for a wonderful (unclenched) anniversary weekend. I have Judy and Glenn to thank for taking care of the girls while Deb and I wandered around the peninsula for a couple of days. The girls have Auntie Cat to thank for spoiling them (and if Auntie Pam was able to get off work I'm sure she would have done some damage as well).

And one last thing. For the record, Debbie does not cheat at Monopoly. I made a bad deal and knew I was going to lose the moment I made it. The only thing that kept me from throttling my bride was to repeatedly accuse her of being a cheat.

Turns out I wasn't unclenched for the entire weekend.
Posted by Greg at Sunday, October 15, 2006 No comments:

Getting My Den Back - NOW

I think Allie is ready to be on her own.

I've hung around her a little. She's fairly precocious. I know she has all the tools she needs to make it in the world without any help from us.

For example: judging from her homework scores I know she could handle something like my job. In fact, Allie would be a wiz at office politics. She has a knack for ingratiating herself with anyone and everyone.

Boss: WHERE THE HELL IS THAT REPORT?
Allie: I like your shoes.
Boss: Oh thanks. I got them in black, too. Hey, why don't we push back that report date by a week or two? I can tell you've got a lot on your plate.
Allie: You said the "H" word.

Child labor laws? Slap the word, intern after her name in the company directory and suddenly we've taken care of that problem.

Getting to work without a license is a more difficult issue. However if she buys a Honda Insight, pays attention to the rules of the road and keeps at least three or four phone books under her butt then she's not going to get pulled over anyway.

Interns don't make much. But Allie could supplement her income by moonlighting as a secret shopper for Disney retail outlets. That would give her enough money to decorate her apartment in the uber pink, Hello Kitty fashion to which she has become accustomed. Clothing won't be a big expense as she'll more than likely show up at the office in the same Princess Aurora regalia at least a couple times a week.

In fact, finances as a whole would be a breeze. Insurance would be extremely cheap. A whole life policy for a six year-old would have astronomically low premiums. I think she could work out a deal with the cable company so she'd only have to pay for Cartoon Network, Toon Disney and Nickleodeon. An investment portfolio based on pillars like Mattel, Hasbro and Crayola would probably take care of her when she's ready for retirement at around 28. And "bath month" means shopping for toiletries would be a rather infrequent affair.

For food she could live off free cookies from the lady in the bakery department at the grocery store. And when that source finally dries up the lady at the deli counter will keep her in knox blox. Eventually rickets might set in but I'm willing to slip her a yogurt stick every now and again.

There's no doubt about it, Allie is ready to leave the nest. We will miss her. Hopefully she'll stop by and see us every now and again. Maybe she could squeeze us in after her Gymboree workout but before her Dr. Seuss discussion group.
Posted by Greg at Tuesday, October 10, 2006 No comments:

Teen angst hotline - Andy speaking. How may I help? 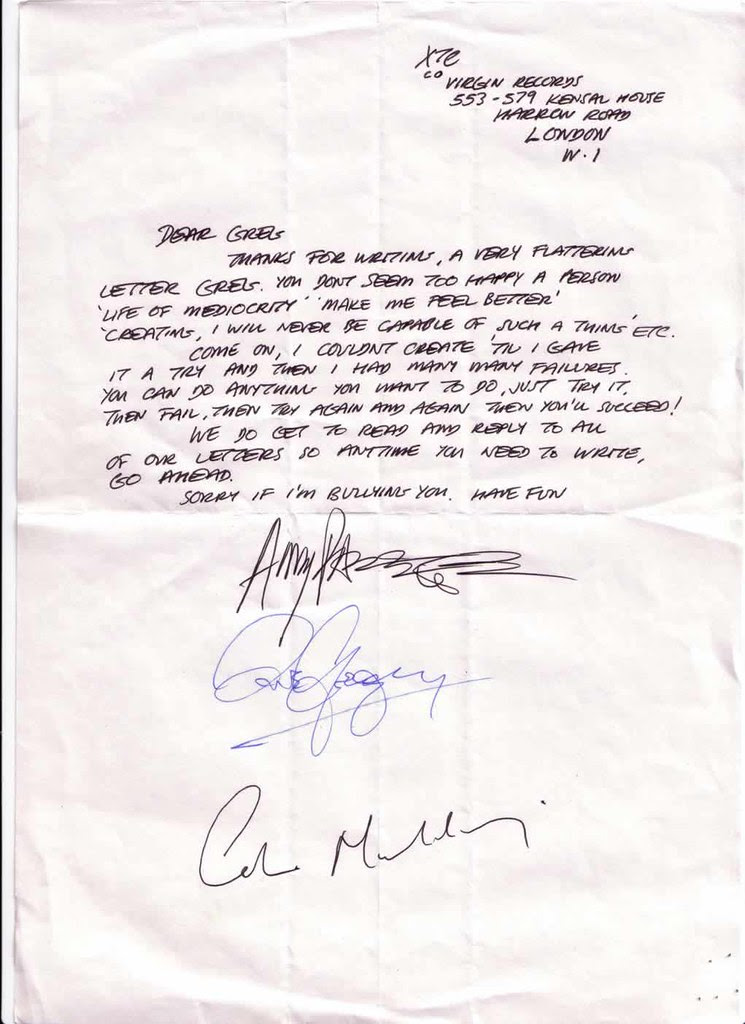 I spent a good part of this evening looking for a photo I took of Mr. T moments after he sprinkled me with his sweat. Mr. T is missing, but I did find this letter from Andy Partridge.

I'm pretty sure that right after Colin Moulding signed this letter he and Andy looked at one another and said, "Saved another teen's life."

Who knows. Maybe they did. Although I don't ever remember being that bad. However the, life of mediocrity line makes me wonder.

Regardless, here I am, firmly entrenched in my life of mediocrity and I'm grinning.

So if you have any slightly morose teens in need of some perspective I know of a pop star who may be willing to help. Just let me know. He and I are obviously pretty close.