How to Make a Little Girl's Week 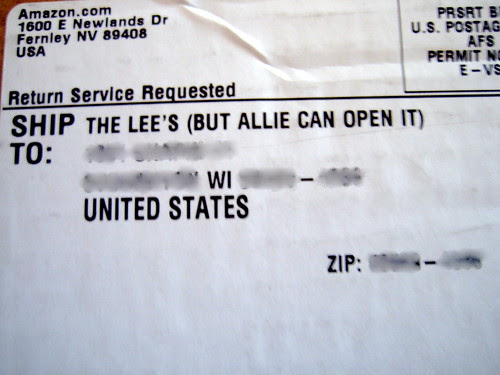 I know it says it's from Nevada, but this box came by way of Huddersfield.

Do you know how Dan and Kerry first met? They both had parents who decided to train their kids to be buskers. By the age of four, Dan and Kerry were forced to spend their days in public areas juggling, bending balloons, biting the heads off chickens and selling origami sculpture.

When they were here, Dan and Kerry identified the same cash generating potential in our children. That's why they sent us a book of origami patterns and some special origami paper to get Allie and Julia started.

As soon as I find a small, live chicken Allie and Julia will be on their way to selling paper penguins up and down the sidewalks during this year's Syttende Mai.

Don Ho is dead. Kurt Vonnegut is dead. I almost crapped my pants at the grocery store this evening.

I always had a soft spot in my heart for Don Ho. Any person who can take a marginally catchy tune and parlay it into an entire career is a genius. Plus, he was on the Brady Bunch once and his daughter is Hoku. Hoku sings Perfect Day which is another one of my guilty pleasures. I would never admit to anyone that I really like this song and that it makes me want to throw on a Speedo and run up and down a beach somewhere.

Every time I hear Perfect Day I think of Don Ho and now he's dead.

Same with Kurt Vonnegut. I don't think of him when I hear Perfect Day; but he is dead. I always liked Breakfast of Champions. I don't remember much about the book (although I can't really look at a hand-written asterisk anymore and not think it looks like a sketch of someone's asshole). I do remember that I liked it enough to declare in my mind that Kurt Vonnegut is (was) one of my favorite authors. Welcome to the Monkey House is also one of my favorites but I'm not sure if I could tell you why. All I know is that I'm going to go downstairs and take one of these off the shelf and read it again.

There is a huge zit in my ear. And because it's in my ear, I think I can hear it growing. If it's not getting any bigger, then it's definitely becoming more and more sore. It's also whispering to me at odd times. Mostly it tells me to buy a Speedo. It also reminds me that you should lance a boil but you should always just leave acne alone.

Then there's the crapping my pants thing.

This past week I've been avoiding foods that are bad for me. I've had diarrhea twice so far. Tonight at the supermarket I starting to cramp up in the bread aisle. By the time I got all the way over to frozen foods I was ready to explode into my khakis. The girls were there. I can only thank God for allowing me to avoid the same story being told again and again each Thanksgiving. "Hey Dad! Remember that time you shit your pants at the store?"

As I stood there in the store, trying to master my lower G.I. tract I could feel the sweat bead up on the back of my neck. It was painful and after about five minutes I was confident I wouldn't be giving birth to something horrible right there next to the frozen pizzas. I tried to work out worst-case scenarios but I was really focused on my sphincter. Eventually this emergency passed (in more ways than one) and now here I am typing.

I'm going to lie down now. I have Tiny Bubbles playing in my head. That should be enough to get me to sleep.
Posted by Greg at Saturday, April 14, 2007 2 comments:

I deleted the part about the growth on my leg and my mother and siblings being evil.

I've really got to stop posting the first thing that pops into my head. If you were here earlier and read this stuff I'm sure you'd agree. Here's what's left:

I was very cheerful when I told them that I was happy that they did something I told them not to do and to go ahead and send me a bill for the honor.

I'm going to have my daughter Julia handle all of my future negotiations.

I'm pretty sure the lawn care service will no longer be her best friend and will not be invited to her birthday party.

Allie cried last night because she saw some boys throw rocks at Forrest Gump's head. I had to convince her that the film has a happy ending. I told her that Forrest and Jenny get married and have a little boy named Forrest. I left out the part about Jenny dying. I was thirsty and wanted to be able to get out of her room and get a drink of water. Wait 'til she sees the entire movie someday. Boy is she going to be pissed off at me when she gets smacked in the head by that one.

I've decided that I'm going to start telling people about all of my good intentions rather than actually follow through with any of them. I'm way too tired these days. That should make Christmas really interesting this year.

Four blocks away, someone won the lottery on Sunday. $40 million. I'm not sure if I have anything to say about this other than I wish this person would buy me a cancer sniffing dog.
Posted by Greg at Monday, April 02, 2007 3 comments: