I hate the big watch trend. 46mm cases are too damn big. I like fairly traditional designs that don’t eat your wrist. I know that cell phones have forced the wristwatch to make the transition from tool to jewelry. However, just because you’re wearing a watch for other people to see doesn't mean it needs to be big enough for them to see it via Google Maps. I wouldn't be so riled up about this but I can’t find a “normal”-sized watch anymore (38 to 44mm). I find a face and a movement at a price that interests me and when I’m ready to buy I notice that the watch is of Flavor Flav proportions. I’m better off building a small enclosure and passing it off as a backyard clock tower.

This is my holy grail watch:

The Omega Speedmaster “Moon” watch. Someday, when I've paid for educations and have enough saved so Deb and I can have a cat food-free retirement, I will buy this watch.  The case size is 42mm, by the way.

Allie had her first real tennis match. She drove two hours each way, waited three and a half hours and got 15 minutes of court time resulting in a 6-0 loss. She said she had some good shots but her doubles partner wasn't holding up her end of the bargain. I don’t want her to be discouraged but there was very little I could do to put a positive spin on the experience (yes, spin, tennis, funny). The cool part is whatever she gets to do from this point forward has to be better. She got her bad banana out of the way early.

Julia wants to, “get good at tennis”. When I throw balls at her I see the potential but I don’t think she’s really into it. It’s clear that five minutes on YouTube kicks the crap out of five minutes of court time. But she’s out there with me and that makes me smile. I actually smile on the inside. Most of the time I’m showing her a grimace on the court because she’s too distracted by insects, her hair, my hair, clouds, strange smells and the slight twinge she has in her shoulder to worry about making contact with the ball.

Deb has suggested that we walk a half marathon in late October. I could do that right now if I needed to. I’d be sore, blistered and miserable afterward but I could make it and probably (despite my wife's certain objections) at the same pace as Deb. That said what I’d like to do is turn the event into an excuse to get into better shape. So I plan to get some walks in each night. I have two months from now. Better go buy some shit because I really can’t do anything without buying some equipment first. I’ll look into things and set my budget at  around $4,000.

I was going to use the words, “small addictions” to describe my relationship with my tablet and phone. This didn’t feel right especially when my phone is beside me every moment of the day. Even when I go out for a walk I have an irrational fear that I’m going to encounter someone impaled on something and the speed at which I can dial 911 is the only thing that will save them. I also have images of being mugged by middle schoolers or needing to get a pic of Bigfoot going through the neighbor’s garbage.

None of this stuff ever happens. But as soon as I leave my bulky phone at home I know some impaled person will have to pay for my choice with his/her life.

What’s worse is my hypocrisy when I see other people using their devices. I’ll think, “It’s a shame how that guy chooses to stare at that phone instead of interacting with his family. Look how sad his kids look. Look how frustrated his wife is. I hope he feeds his pets. He’s going to die all alone.” That’s about the time I feel my phone vibrating in my pocket. Unless I’m at the dentist or pinned under something heavy, I almost never hesitate to grab it.

I just stopped typing to pick up my phone. It was an email from Deb about Julia’s school orientation. I read it and then returned to typing. Is that wrong? I really wanted to know if Julia was nervous so a little “blog pause” isn’t a big deal. It’s no big deal to chop up everything that I do into little portions. Not to be melodramatic, but I suspect my behavior means those deep dives into any activity are gone. Everything comes in short, powerful (sometimes overwhelming) bursts. My life is fractionated. I download songs, not albums. I read spoilers and skip the theater. Instead of conversing I trade quips. A magazine article seems like a heavy commitment and a book might as well be a marriage. I look at my family and most times there’s a screen in front of their faces.

Should I complain? I am soaked in information. I’m accustomed to getting immediate, useful answers to every query. I feel in control and in touch with most of the things I need to accomplish each day. And despite not being in the same space as them, I am connected to people in unexpected and delightful ways.

I’m not sure where I was going with this post. My phone just buzzed. Mom just liked my picture of a flower on Instagram.
Posted by Greg at Wednesday, August 20, 2014

As a family, we hold hands, but we lead each other down some dark paths. Most of the time it’s fun or at least innocuous but sometimes. . . I really wonder if I’ve made a huge mistake in making death and dismemberment the default for repartee. Most people don’t get the warmth that a well-timed threat to be murdered in your sleep can bring. I’m constantly in fear that the girls will alienate themselves from people because they think, “Oh my god, I will cut you!” is the proper response to a crappy knock-knock joke.

Case in point: we’re traveling to South Dakota and for conversation’s sake I was thinking of emergency scenarios that could pop up when we were all very far from home. I asked the girls what they’d do if I had a heart-attack out in the middle of nowhere. Without missing a beat Julia says, “I would end your suffering with a knife.” The timing was perfect and it was hilarious but even by our standards that was pretty dark.

Right now I’m not sure if I’m more concerned by the precedent I’ve set for dark humor or the idea of Julia “ending my suffering”.
Posted by Greg at Monday, August 18, 2014

The drive to my parents’ house is long. Four hours on a road that offers very little to look at. Not that it matters. I’m guessing that if I drove through Yellowstone three or four times a year I’d become numb to the scenery. It’s four hours in a car and I hate being trapped in a car. I don’t know why I have this reaction. After all I am the king of wasting valuable time on pursuits that don’t matter. But for some reason, a long car ride makes me feel like I chose to spend the last four minutes of my life writing a review on Amazon for some shoe laces I bought two years ago. It’s a reprehensible waste.

That’s such a weird reaction considering long car rides usually put me in places where I discover joy. I just never seem to connect the two.

I’m going home tonight. I’ve been feeling really nostalgic lately so this might be a good time to get back to where I spent most of that decade. I’ve been thinking a lot about the 70’s. I’ll probably listen to the 70’s channel on satellite radio. The music often takes me back to the Surf Club. It was a pool my family belonged to when I was little. I’ll hear, “Treat Her Like a Lady” by the Temptations and suddenly I smell suntan lotion and chlorine. I can feel the wet heat of walking through puddles that have been cooked on concrete. This is right before I leap into the cool, blue water right at the black number four painted on the side of the pool. It had to be four feet because I couldn’t swim. I could bound off the bottom of the pool to the surface and then thrash my way to the side, but that was about it.

I can see my red, Charlie Tuna swim trunks.

Why did my mom buy me trunks with a mascot for canned tuna on the front pocket? I’m sure she didn’t put a lot of thought into them. It couldn’t have been some kind of statement about me or even the family’s tuna preferences. If this was case then I’m sure I would have had articles of clothing featuring Heinz Ketchup. We ate a lot more ketchup than tuna. No – Charlie was irrelevant. The swim trunks were either on sale or just too cute to pass up.

I’m sure I’m thinking about the 70’s because Dad died. That’s where he mostly lives in my head. I’m sure I put him there because not only was that when we were all together under one roof, but he was in his prime. He was better looking and hipper than the other dads. His athletic build and calculated tan was a contrast to the other men I saw playing with their kids in the water. I don’t remember if he spent a lot of time playing with me in the pool. I know he did. I know he would throw me in the air and let the water catch me. This was probably not as much as I would have liked, but six year-olds are demanding. I would have wanted him to spend every second tossing me, playing Marco Polo and seeing how long we could hold our breath.

That's what I did with my kids this weekend in the pool. I'm glad I got to do that one more time this summer.

By the way, when I got into town around 9:00 on Friday I stopped by the Surf Club. It was empty and I walked up to the gate. Some new covered seating and new water slides, but otherwise it all looked the same - only smaller. Those pools were are a lot smaller than the ones in my memory. 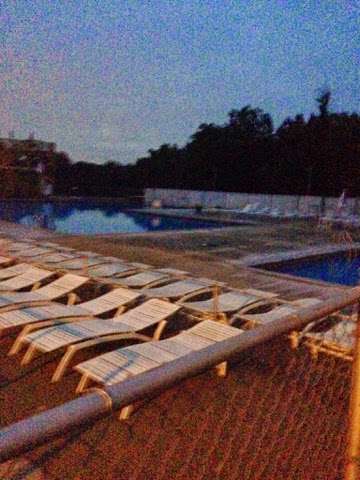