Allie, Julia and I were down in the basement. I was busy putting something together and the girls were playing quietly when the computer began to play Born to Run.

Allie and I stop what we're doing for a second to look at Julia then we all returned to what we were doing.

The next song was Burt Bacharach's Raindrops Keep Falling on my Head.

No reaction from the four year-old.
Posted by Greg at Monday, December 31, 2007 3 comments:

During the benediction at church on Monday Julia was standing in front of me making faces at the little girl turned around in the pew ahead of us. The pastor began his prayer and I whispered to Julia, “Tilt your head.” She tilted her head back far enough to make eye contact with me. I looked at her and said, “The other way.”

Julia turned her head to the left.

Her head dropped and she looked down. “Why do we have to do this?” she spat.

I didn’t answer; it wasn’t a good time for a conversation. I was just thankful that despite plenty of squirming she was being good. She occupied herself by writing her name in the Christmas program and circling key passages that she would point out to me and then nod her head as if she had discovered a cipher.

I realize it sounds as if we weren’t paying attention but that’s not the case.

I sang. Deb sang. She sounds better plus she knows all the words. Allie tried to sing. She asked me to point out the words in her program so she could make an attempt. I’d hear her blurt out a word here and there. It was more than Julia did. I looked over at Glenn. His lips were moving, but I didn’t hear anything coming out. He was singing even if he wasn’t singing. I looked down the row to see if the rest of the family was singing. I couldn’t tell. It didn’t matter. The vibe was there. It was the night before Christmas and as Julia squirmed and Allie blurted; while Debbie doodled and Glenn lip-synced we all felt it and it was good.

Julia asked, “What are we doing after this?

I hope she looks for that line in next year’s program.
Posted by Greg at Wednesday, December 26, 2007 1 comment:

My Oven - My Enemy

Why can't I cook?

I don’t seem to be able to properly heat food so that it not only tastes good but it’s not a threat to anyone’s health.

See - Deb gets a free turkey from work each year. Usually this bird sits in our freezer like a lost WWII airman waiting to be discovered by a forensic anthropologist. [I’m sorry. That one was really stretching it – but I’m trying to be light-hearted while facing my handicap.]

Rather than let the turkey take up space in our small freezer all year long I decided to cook the thing right away. On Sunday I inserted a thermometer into the deepest part of the breast and plopped the turkey in the oven. When the thermometer told me the meat had reached 161 degrees Fahrenheit I took the thing out of the oven and let it rest until its temperature continued to rise to around 165.

I carved the bird.

It was pink inside.

I glared at her with an electric knife in my hand and she immediately said, “I mean that’s a pretty . . . pink bird."

The deeper I carved the more raw meat I discovered. Thankfully the outside of the breast was done and seemed palatable so I was able to serve food to my family that wouldn’t turn them into root beer dispensers. But there was still a lot of turkey sashimi to deal with. Sliced thin I served myself a nice e-coli carpaccio. For some reason I felt it was my duty to eat the rarest bits. It was my penance.

Is this really that difficult? Hell, even the Shepard’s Pie I made on Saturday was undercooked (the mashed potatoes on top needed to brown more). And if you eat at my house on a regular basis then you know yourself that at some point I will serve you undercooked steaks, fish, prime rib and lamb.

It might be my lack of patience. Maybe I have a crap thermometer (although I doubt it). Regardless, eventually I’m going to hurt someone and I must be stopped.

This time, with the turkey, I’m waiting to pay. I’m reacting to every twinge in my stomach and every fart as if it’s a signal for the flood gates to open. And I deserve whatever I get. For I’m the king of raw and from my throne of porcelain I will reign.

Tonight’s menu includes PB&J, raw carrots, cheese and crackers with a side of cottage cheese.

I wonder if the girls would like gazpacho?
Posted by Greg at Monday, December 17, 2007 8 comments:

It's no coincidence he made this before Debbie finished Christmas shopping.

Allie got on the perfect attendance roll at school. We decided to celebrate by taking her out to dinner.

Choice is something that confounds my daughter. I told her we'd take her to any restaurant she wanted. You'd have thought I had strapped down a fuzzy bunny and a cuddly hamster, picked up a hammer and said, "Choose." She made these funny, constipated noises until I began to offer some suggestions. One was Ella's Deli.

She jumped at the chance to go Ella's.

I won't bother describing Ella's to you. There is a Web site:

So we went to Ella's and the girls ran around like honyoks and looked at all the displays while we waited for our food. Once it arrived I ate more pickles during this meal than I ever have before. I even tried deep fried pickles. Had celery soda, too. They're both pretty good.

The food is always good at Ella's but what I wanted to write about was the mechanical horse they have. One glance at this thing and I was immediately transported back to my childhood. The horse was cast from metal. No plastic here. The paint is worn and the saddle looks as if has entertained the butts of generations of kids.

It still only cost a dime to ride. We put Julia on the thing and dropped our dime in the slot. I was shocked by how violently this thing jerked Julia back and forth. Judging from the look on her face Julia was surprised, too. 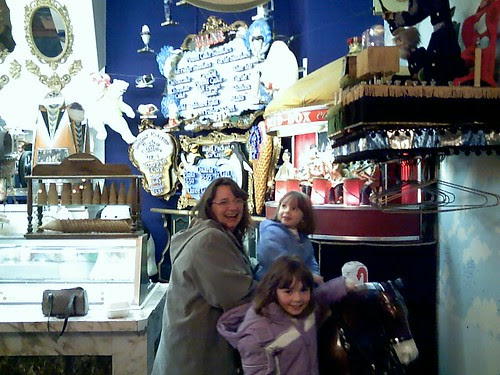 My children have grown up with plastic riding horses that charge at least 50 cents to gently sway their riders to and fro.

I find this sad.

I like my mechanical horses violent. If I was four, I'd want a cheap ride that feels as if I might fall off and impale myself on one of the horse's sharp metal ears. This is also what I want for my children.

Fortunately they can still find it at Ella's Deli.

There are times when I wake up and feel the cat, Simon, wrapped around my leg. He burrows under the covers, forces his paw under my calf or thigh and holds on to my leg. I imagine it looks something like this: 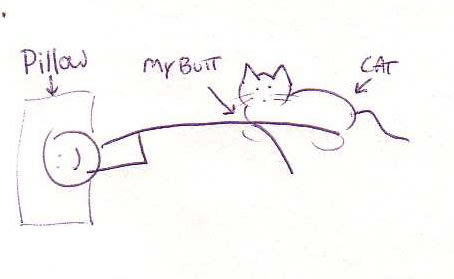 A few nights ago, I woke up as Simon was adjusting his position under the covers. I could feel his head move and I knew he had his face buried in my butt. Normally that would be enough to get me to reach under the covers and throw the cat on to the floor.

But I had to fart.

This was wrong. This was deranged. Man or beast; taking pleasure in blasting one of God's creatures with your flatulence is damaged thinking.

I cut loose with a big one.

He didn't even twitch.

So I waited and hit him again.

I couldn't have killed him. He was still warm.

I started to get a little freaked out. After all, I'm already baffled by how the cat can breathe under all of those covers. Now there had to be massive amounts of methane and bacterial gas trapped like a diving bell around his furry little head.

It was a miracle. My cat has developed some kind of gills. . . or is a fetishist.

I start to laugh. I try to stop myself from laughing because there's no way in hell I want Debbie to wake up and ask me to explain why I'm laughing.

I'm farting on the cat's head, honey. Go back to sleep.

I couldn't take it. I grabbed Simon and (on the off chance I really did knock him out) I placed him gently on the floor.

So far I haven't been able to look the cat straight in the eye. That's going to take some time.
Posted by Greg at Sunday, December 02, 2007 1 comment: