A man in a gold Honda civic camped in the corner of the parking lot of the hotel we stayed at in Louisville. I had to return to the car to get shoes and the girls watched me from the window because they assumed he was on crack and that he was going to attack me and steal our shoes. By the time I made it to our car he had all of his doors and the trunk of his Civic open and had changed clothes. He was toweling himself off as he watched me dig around for our shoes. I made it back to the room unscathed.

No one slept in Louisville because the power didn't come back on until about 3:00 a.m. The temperature in the room and my CPAP wasn't operational and the people running around the halls as if they had to forage for supplies to survive the Armageddon. They had dropped light sticks in the hall. I'm guessing that must have attracted the idiots. Later in the day, we were talking about our favorite parts of the day and Deb said it was leaving our electricity-free hotel room. Fortunately she also had plans that provided better memories of Louisville.

The Louisville Slugger factory/museum was more fun for me than anyone else. I'm not that huge of a baseball fan but we do like to go to games when we can. My favorite player was Cal Ripken and because of that the Orioles are my team. So when I had the opportunity to pick up Cal's bat and pose for a pic it was kind of a thrill. The girls enjoyed the Batman and Superman uniforms they had on display and watching them make the custom bats for major league players was a trip. 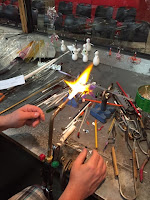 It was the glass flaming we did after the bat museum that thrilled the girls. Mark showed the girls how to create works of art. He was engaging and immersed all of us in the experience. Allie made a flower and Julia made a "kiss". They will ship the objet d'art back to Wisconsin (they need to sit in a kiln for 24 hours). Julia says, "FIRE" was the best part of flaming glass. Allie says, "Making the petals," was the highlight for her.

Deb found a wonderful restaurant. I had a pimento/cheese spread sandwich. Allie had a chicken sandwich with apples on it. This place seemed to like to put apples in everything and that wasn't a bad thing. The food was truly memorable - especially the huge slab of strawberry cake we all shared. The guy in the parking lot said he was two dollars short for a twenty dollar bus ticket. We got him half way there with a buck.

The hotel in Franklin, Kentucky is nice. I almost knocked out my front teeth in the pool but other than that it's good to be in a place that has a constant flow of electricity.

I don't know what we're going to do when we hit Nashville later this morning but it doesn't matter, we'll have fun spending money here in the south.